2014 was another year when it really paid to be an American investor.

The US economy grew 2.7% year-over-year through the end of the third quarter, the dollar grew 12.8% versus a basket of foreign currencies and US inflation hovered around 1.3%. Everything went right for the US Investor.

That is the headline story, but there were other important investment elements that did not quite fit so well with the all-American dream.

However, some of the major empirical factors that have been shown to drive long term returns were not present in the markets in 2014.

For example, smaller capitalization stocks, which have in the past had higher return and higher volatility than large cap stocks, returned only 4.9% for the year with all the positive return gain coming in the last quarter (9.7%).

On the other hand, the utilities sector returned 28% in 2014, as utility companies benefited from regulated pricing, lower interest rates and decreased cost of energy acquisition. 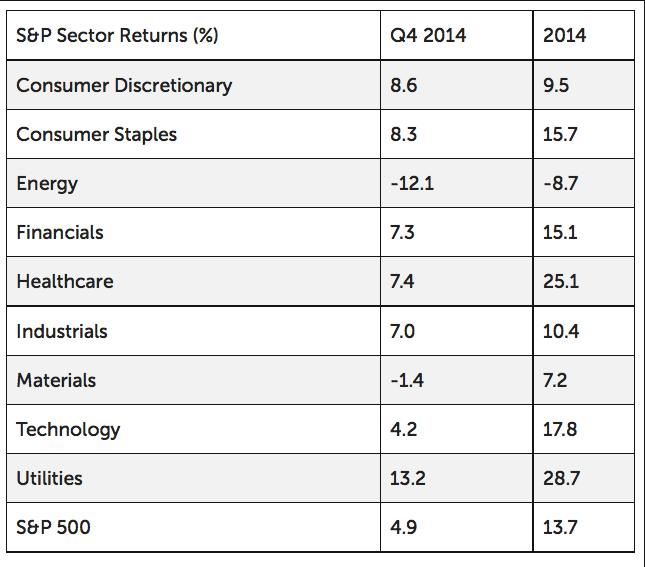 Healthcare stocks returned 25% for the year, due to increased merger activity in bio-tech stocks and increased demand for services and drugs as a result of health care reform and an aging consumer base.

The technology, financial and consumer staples sectors also had better than average performance for the year.

REITs (Commercial Real Estate) enjoyed particular success in 2014 (up 30%) and the fourth quarter (up 13%), recovering from poor relative performance in 2013.

REITs tend to do well as the economy and job outlook improves and demand for commercial office space increases, leading to stronger cash flow from increased occupancy and higher rental income.

In addition, with interest rates low, investors seeking higher yield look to REITs to provide more income than a traditional bond.  As a result of these and related factors, REITs were the best performing major asset category in 2014.

From the perspective of a US Investor, non-US stocks of developed countries (measured by MSCI EAFE) declined 4.9% in 2014.  These equity losses can be entirely attributed to the very strong dollar, which accelerated in the latter half of the year. 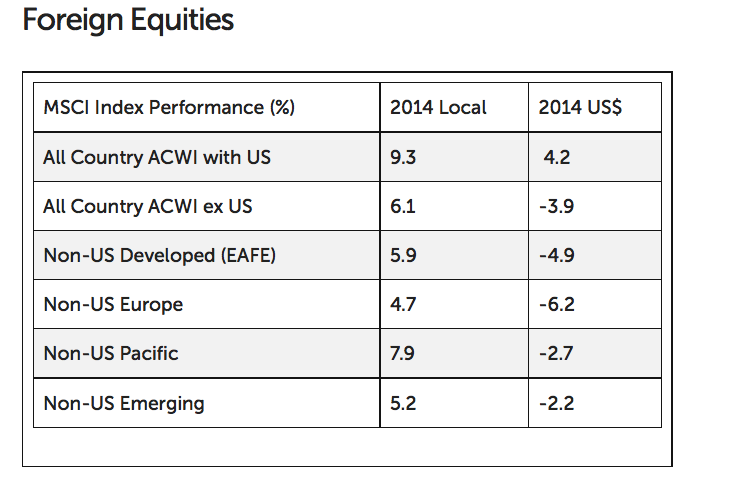 From the perspective of the foreign investor investing in his own currency, the result looks quite different, with the same index up 5.9% in local currency terms. European developed market returns were down 6.2% in dollar terms and up 4.7% in local terms.

Pacific region developed market equities lost 2.7% in dollar terms but returned 7.9% in local currencies. Emerging market returns showed a similar pattern with the return in local currencies up 5.2% and down 2.2% for the US investor.

The rush towards a stronger dollar began in June and continued through the end of the year. We believe that the factors leading to the strong dollar are primarily policy related.

Fed policy to stop quantitative easing as other countries in the world begin (Europe) or continue (Japan) their monetary expansion policies leads to an increased demand for dollar denominated assets.

Regional interest rate differentials also play a major role and, surprisingly, our interest rates are higher than many rates around the rest of the globe.

Regionally, as the US economy gains strength, the European economy remains mired in slow growth with increasing fears of deflation, structural unemployment and weak demand.

However, declining oil prices and a weaker Euro should benefit the European economies that are dependent upon imported oil and trade exports, such as Germany and, to a lesser degree, France, and a more accommodative monetary policy, such as quantitative easing, could help the Euro-zone economies.

The expansionary monetary policies of Prime Minister Abe in Japan helped a Japanese economy mired in 20+ years of stagnant growth.

However, the misguided increase in the consumption tax last year stalled what growth had occurred from inflating the economy.

Japan remains the sick old man of Asia, and while the equity markets were positive in local terms, the plunge in the yen ultimately hurt foreign investors.

Here, too, declining oil prices should help both the Japanese consumer and Japanese industry. Other Asian manufacturers should also benefit from the decline in commodity prices.

However, countries that use commodities for production should have increased profit margins and greater returns.

In China, slowing growth and real estate policies that support oversupply are risk factors that should not be ignored. China’s enormous consumer market is increasingly important to global and regional growth.

Almost every investment expert expected interest rates to increase in 2014, due to both Federal Reserve action and an improving economy.

The experts were wrong, as the 10 year Treasury interest rate ended the year at 2.2% from the 3.0% rate at the beginning of the year. 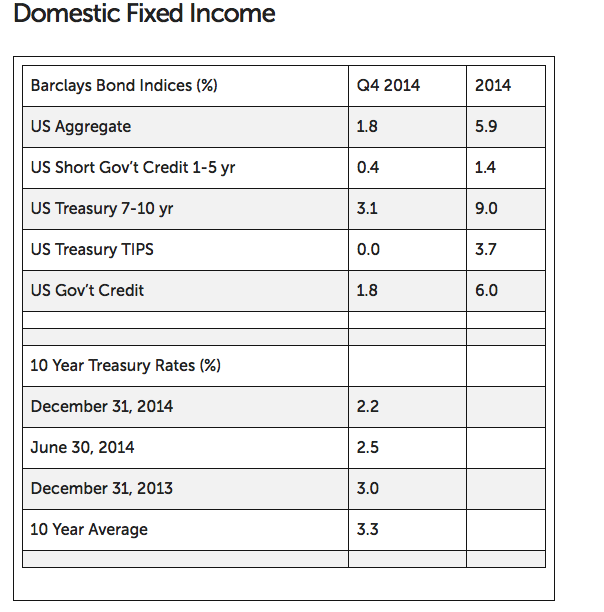 Longer maturity (20+ year) Treasuries benefited with returns of 27.5% while  shorter maturity Treasuries (1-5 year) returned only 1.2%, an enormous difference in price return between long and short maturities.

The good news is that the shorter-duration fixed income allocations did not lose money; the bad news is the opportunity to make higher returns from longer maturities was lost.

Spreads on corporate bonds dropped to their lowest levels in seven years at mid-year, but rose rapidly towards the end of the year.

Looking forward to the first half of 2015 and beyond, the major drivers of global performance remain the economy, the actions of the central banks and equity valuations.

While we expect some technical correction, the policy factors driving the strong dollar should continue, especially if, as expected, the Fed raises rates while the European Central Bank introduces quantitative easing.

While US equity valuations are higher than at the end of 2013 and higher than their 20 year averages, they don’t appear to be irrationally high.

On the positive side, corporate earnings are at record levels and growing, and until employment gains lead to wage increases, these profit margins should stay high.

A strong dollar and weak oil price are a mixed bag; consumer sentiment has improved markedly in the last quarter, labor gains have remained consistent with unemployment falling to 5.6% at the beginning of 2015.

Certain sectors, such as consumer discretionary and utilities, should benefit from lower energy costs; energy and materials sectors are likely to suffer lower profits; healthcare should continue to benefit from regulation and an aging consumer base.

On the other side, valuations are high and therefore going forward, the potential rewards for equity ownership are likely to be muted.

Global economic weakness will be harmful to US corporations increasingly dependent upon foreign sources of revenue.

The current valuations of non-US developed equity markets are lower than both their 10 year averages and the current US market.

Exposure to these foreign equities may well benefit from these attractive relative valuations, but a stronger dollar will create headwinds for the US investor.

On the other hand, non-US emerging markets valuations, while attractive relative to the US, are near their 10 year averages. Some exposure to non-US markets is appropriate given these offsetting factors.

Last year at this time, we expected intermediate and long term rates to increase as quantitative easing was removed from the Fed’s bag of tricks.

While QE was removed, rates did not change and, in fact declined.  This year, our views on this regard are somewhat tempered by that observation.

We expect that the Fed will move to increase short term interest rates in increments throughout the year.

But the Fed has less impact on intermediate and longer term rates driven by global market demand for US bonds.

In the very short term, we anticipate intermediate treasury rates to stay near the 2.0% level and increase later this year due to pressure from stronger economic growth in the US and an increase in short term rates by the Fed.

This rate increase will likely be dampened by non-US monetary policy and weak overseas growth.

2014 was the year that the US investor lived the American dream.  US large cap equity returns were strong and the other major US asset classes did well.

Again in 2015, we expect that an optimally diversified investment portfolio that encompasses global assets will fall in the middle of a wide range of possible outcomes and this approach will lead to reduced investment risk, more certain outcomes, and better risk-adjusted returns.

For 2015, we’ve added the rest of the world to our American dream. 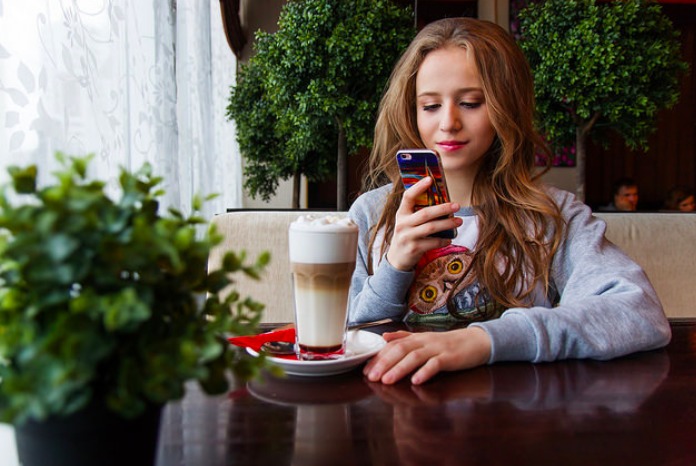 Why value and income investments will make a comeback 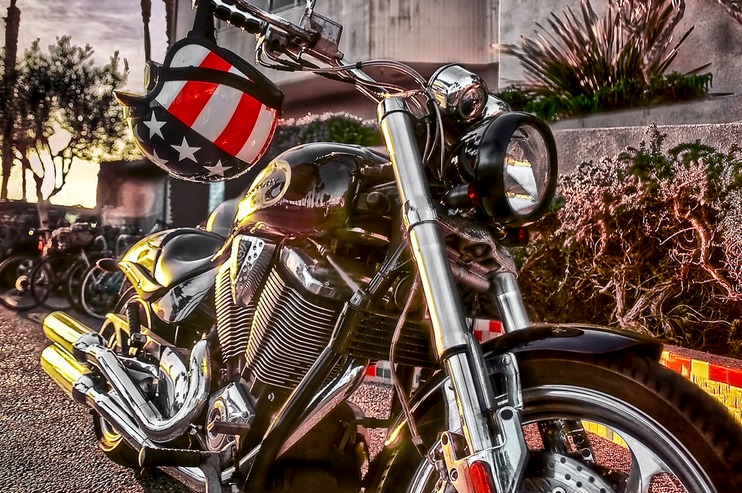 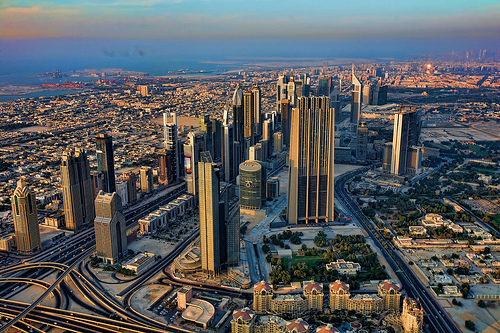 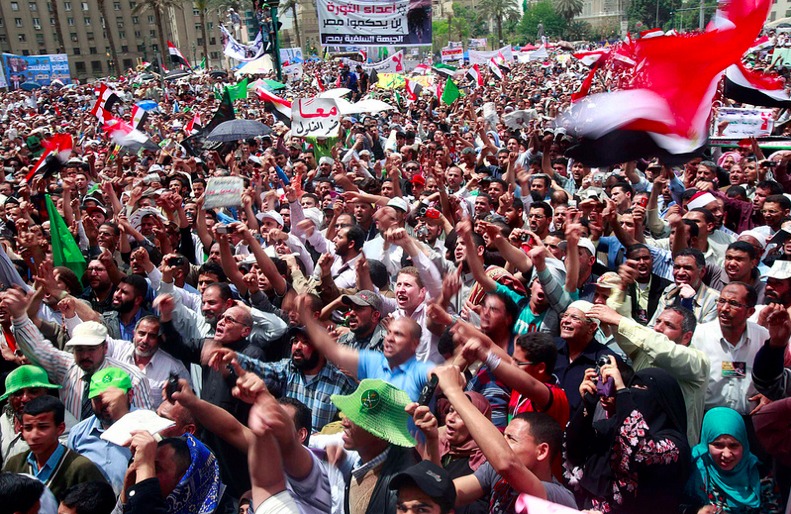