Martin Leclerc, portfolio manager on Covestor, sees potential trouble in 2014 for a US stock market that he thinks is being propped up by the Federal Reserve — and far better stock deals overseas.

“If we see a meaningful decline in the US stock market in the fourth quarter, then I will be bullish for the US in 2014,” says Leclerc, a 30-year industry veteran and manager of the Barrack Yard Core International Portfolio. “But if the market continues higher, then I’ll be very bearish.”

One of his big worries heading into late 2013 is corporate earnings growth that is not keeping pace with stock market returns. Leclerc notes that the S&P 500 Index is up nearly 50% over the past 24 months, although earnings growth is now slowing.

Meanwhile, he says investors are “naïve” to think that policymakers will be able to guide the markets through what he calls the “era of cheap money” without negative unintended consequences. Continued economic stimulus could be increasing the risk of a new bear market – either before or shortly after that stimulus is shut off.

That said, the investment manager continues to buy stocks  – just not very many US-based ones. While he does see some values in the US tech and agriculture industries, he believes that the most promising opportunities are almost all overseas.

Leclerc cites CAPE — or a cyclically-adjusted price-to-earnings ratio. It seeks to gauge stock valuations over the long haul. By that measure, stocks in Greece, Italy, Spain and Singapore all are trading at a 40% discount to their long-term valuations. 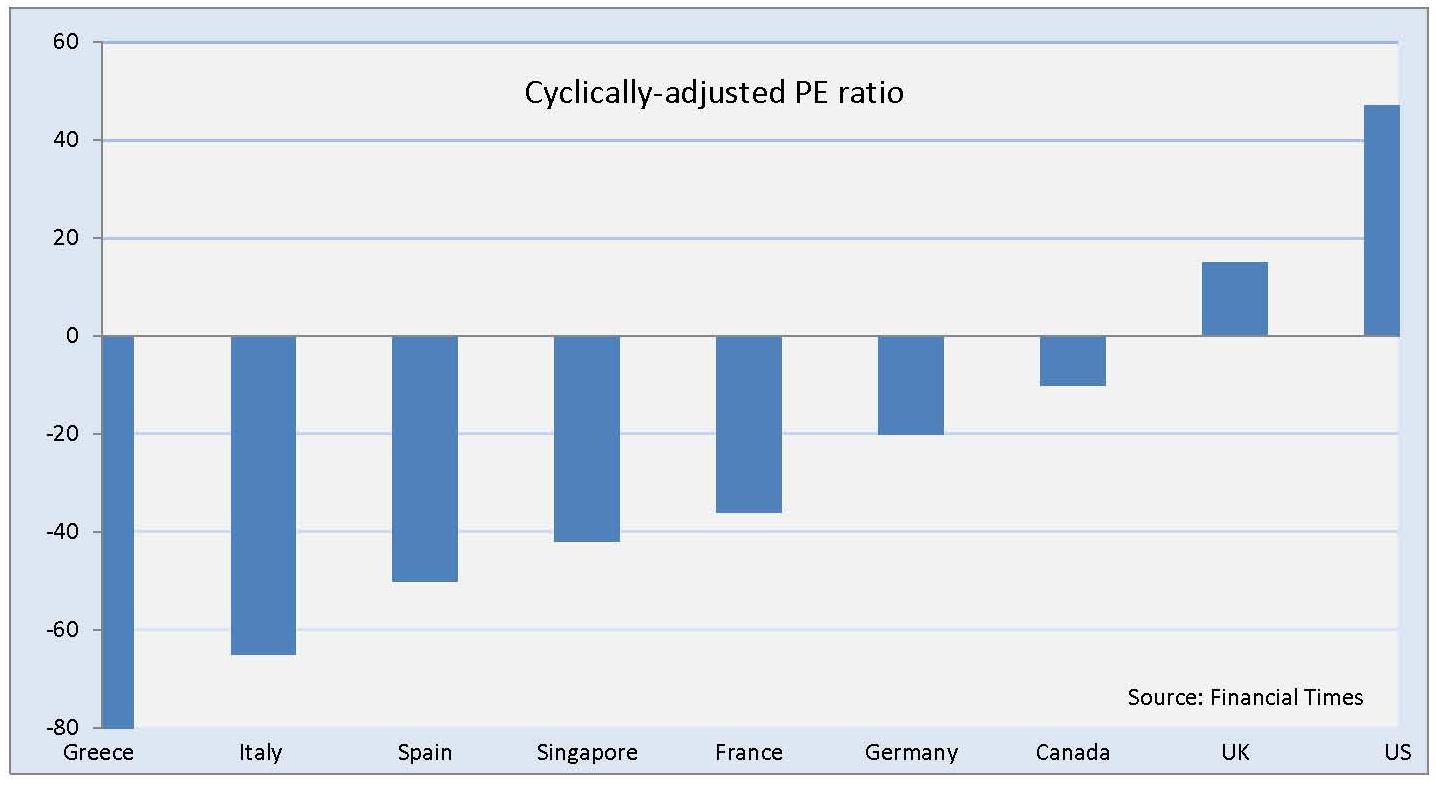 To the contrary, US stocks by that same measure are historically expensive at 50% premium.

As a result, Leclerc expects that stocks in many European countries and in Singapore will return 8 to 9% annually over the next 7 to 10 years, while US shares return only 4 to 5% over the same period.

Leclerc does not see European stock markets as an investor’s panacea. Many stocks in the region have become more expensive in recent months. According to Reuters, both euro stocks and the S&P 500 have posted returns of about 20% this year, but euro stocks have outgained their US counterparts by 10 percentage points since the start of July. Leclerc believes that in particular, European stocks with strongest global brands are too pricey to fairly compensate investors for the investment risk.

Yet Leclerc says he is able to find lesser-known companies that are still high quality, are generating cash flow and earnings, and are selling at attractive prices – ones he thinks will have potential to rise over the long term.

“It’s true, the business conditions are still stressed in Europe, but there are companies that are still making money,” he says.

One fairly common argument against international investing is that many US investors already have a healthy exposure to the global economy. That’s arguably by default: Most stocks on the S&P 500 generate a substantial portion of their revenue and profit from outside the US.

But for Leclerc, buying international stocks is not a matter of global diversification. Rather, it’s a way to possibly generate stronger investment returns by buying strong companies at better prices — ones he thinks may ultimately have more room to run.

“I would rather just go where the values are,” Leclerc says.

The Fed has created an asset driven economy.

The Buy and Hold model managed to do well relative to the S&P index during the month of April.