The US stock market reached more record highs during the second quarter of 2014. The S&P 500 Index (SPX) posted a solid 5.2% gain during the period. The continuing bullish trend resulted in both the Dow Jones Industrial Average (DJIA) and S&P 500 indices recording a series of all-time record high closes during the quarter. The Nasdaq (COMP) reached heights it hadn’t seen since March 2000.

International markets also showed solid returns during the second quarter. The MSCI Europe Australia Far East Index (EAFE) had a 4.3% gain, while the Japanese Nikkei 225 (NIK) market rose 6.7% during the quarter. The emerging markets also enjoyed a strong quarter, posting their best quarterly returns since 2012. The MSCI Emerging Market Index rose 6.7% for the quarter (led by China’s rise of  5.7% and India’s +12.7%).

The Fixed Income sector (bonds) stabilized during the second quarter. As of June 30th, the 10-year Treasury yield stood at 2.53% (0.2% lower than the 1st Quarter). The Federal Reserve Bank continues to support low interest rates, but has been confident enough about the state of the economy to continue reducing its bond purchases. Assuming no change in its plans, the Fed expects to cease bond purchases by October. Thereafter, subject to economic conditions, the Fed may begin to slowly increase its base interest rates.

On the geopolitical front, with Iraq, Ukraine and Syria as sources of global anxiety, concern over oil supplies pushed oil prices above $107. 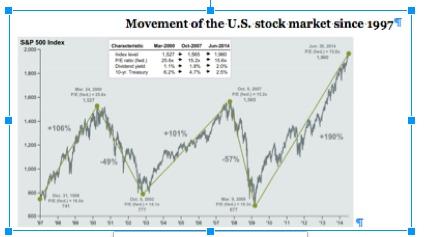 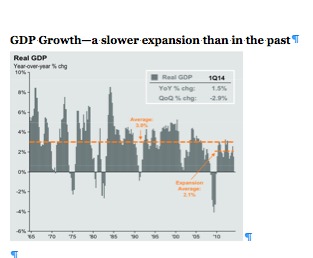 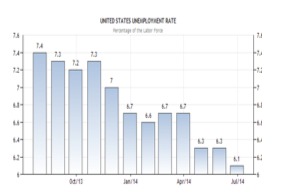 The U.S. economy contracted in the first quarter of 2014 as consumer spending declined. The decline in GDP was the largest experienced since the depths of the last recession.

The U.S. Labor Department revised its Q1 estimate to reflect a GDP decline of 2.9% (annualized ). This is the worst reading since Q1, 2009.

Mixed progress on the employment front

Reported job creation surged beyond expectations in June with the unemployment rate falling to a near six-year low of 6.1%. The U.S. economy has now regained all of the jobs lost since the last recession and the total number of working Americans is now higher than its previous peak in January 2008. That’s the good news.

As Fed chair Janet Yellen said: “The existence of such a large pool of partly unemployed workers is a sign that labor conditions are worse than indicated by the unemployment rate.” According to the Census Bureau, since mid-2007, the US population has grown by 17.2 million,  but we have 374,000 fewer jobs since the 2007 peak. It’s no wonder the Fed is being cautious.

By the end of the 2nd quarter, the U.S. housing market had begun to rebound from its winter slowdown as more homes came onto the market. According to the Commerce Department, sales of new single-family homes leaped 18.6% in May. Sales of existing homes increased by 4.9% (to a 4.9 million annual rate). This represented the largest monthly gain in nearly three years.

The S&P Case-Shiller index of home values increased 10.8% from April 2013. While quite positive, it was the smallest 12-month gain in more than a year. With the average 30-year fixed-rate mortgage at 4.17% mortgage financing costs are still near historically low levels.

The U.S. economy continues to expand at a modest pace. The US manufacturing index had a reading of 55.3 in June. Readings greater than 50 indicate economic expansion. Increased consumer spending, lean inventories and improving overseas markets should keep U.S. assembly lines busy in the second half of the year. 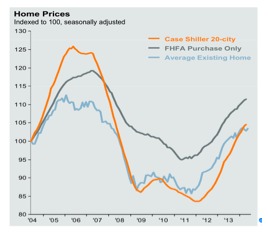 Consumer confidence is showing signs of strength. In June, the University of Michigan’s Consumer Sentiment Index reached its highest level in more than six years. The index rose to 82.5 in June from 81.9 a month earlier. More employment opportunities, record stock prices and improved property values are contributing to consumer optimism.

While feeling more confident, Americans are still paying more for gas, groceries and other essentials. This continues to underscore the need for bigger wage gains. In May, consumer prices rose by the largest amount in more than a year.  As can be seen in the graph to the right, inflation stood at 2.1% in May (according to the U.S. Commerce Department.)

That’s the highest inflation level since 2012 but is still within the Federal Reserve’s 2% to 2.5% inflation target. The “core CPI” inflation rate currently stands at 1.9%. This is well-below the 50-year average of 4.1%.

The Euro-area economy is struggling to sustain its recovery. Earlier in June, the European Central Bank introduced a negative deposit interest rate, announced targeted loans to stimulate lending and held out the prospect of asset purchases to stoke growth and a modest level of inflation in the EU’s 18-nation region.

The Eurozone’s gross domestic product (GDP) grew 0.2% in Q1 of 2014. Unemployment in the 18 Eurozone countries declined fractionally but remains quite high at 11.6%. There is considerable divergence in the unemployment numbers between the countries of northern and southern Europe. German unemployment is running 5.1%, while Italy’s is at 12.6% and Spain’s is a staggering 25.1%.

Japan’s economy was boosted by personal consumption soaring 8.5% as consumers went on a shopping spree in advance of a scheduled April 1 sales tax increase. Japan’s economy grew an annualized rate of 6.7% in the first quarter of 2014. With a focus on expansionary fiscal and monetary policy, over the past 18 months, the first and second parts of the Japanese government’s three-pronged effort to revive the economy have helped spur Japan’s economic renewal.

The Chinese economy continued to show signs of slowing. During the first quarter, the country’s annual growth rate dropped below the official 7.5% target to 7.4%. The HSBC Purchasing Managers’ Index of Chinese manufacturing showed a slight contraction, and housing prices fell in half of China’s 70 major cities.

Beijing has stepped up its policy support in recent months to give a lift to economic growth. This includes such measures as targeted cuts to reserve requirement for some banks, quicker fiscal disbursements and hastening construction of railways and public housing projects.

In May, business activity in the Emerging Markets expanded at its fastest rate in three months. HSBC’s emerging markets index of manufacturing and services rose to 50.6 in May. While positive, this still remains well below the index’s long-run trend level of 53.8. Brazil, which hosted the soccer World Cup this month and faces presidential elections later this year, reported the weakest output expectations among the BRIC economies.

Most US equity sectors rose in the second quarter of 2014. The broader market S&P 500 rose 5.2% for the quarter and is up 7.1% year to date. For the quarter, the Dow and Nasdaq indexes rose 2.8% and 5.3% respectively. Year-to-date, the Dow is up just under 2.7% while the Nasdaq has risen nearly 6.2%. During the quarter, value stocks out-performed growth stocks and large / mid-cap stocks performed better than small company stocks.

The MSCI EAFE index, which represents stocks domiciled in developed non-US countries, was up 4.3% for the quarter. Japan posted a gain of 5.6% for local investors, which translated into a 6.7% gain for US investors. In dollar terms the MSCI EAFE index is up 5.1% year to date vs. 7.1% for the S&P 500.

The MSCI Emerging Markets Index showed strong performance in Q2 — rising 6.7% during the quarter. After a negative first quarter, the index is now up 6.3% year to date. The emerging markets showed the signs of revival following the last few quarters of lackluster growth. BRIC countries (Brazil, Russia, India and China) posted strong returns with China up 5.7%, Russia up 10.8%, India up 12.7% and Brazil up 5.2% during the quarter.

The bond market started the year strongly and continued its positive performance into the second quarter. The Barclays Capital U.S. Bond market index posted a 2.0% gain for the quarter and is up 3.9% year to date. The yield on 10-year Treasuries fell from 2.7% to 2.5% during the quarter. This contributed to an improvement in bond prices over this time.

Treasury Inflation-Protected Securities (TIPS) reflect investor expectations about the future inflation trends. TIPS experienced a solid 3.8% gain during the 2nd quarter and gained 5.5% for the first six months of 2014. In part, this is a recovery from the declines experienced in 2013.

Alternative holdings produced solid returns in Q2. The Alerian Master Limited Partnership Infrastructure Index (which tracks energy transportation and storage facilities) gained 13.8% during the quarter and is up 15.6% year to date.

Commodities (the Bloomberg Index of energy, precious metals, agriculture and livestock) was essentially flat for the quarter (+0.08%). The index has risen 7.1% year to date.

The global equity markets have continued to post positive returns throughout the first half of 2014. While some sectors are still fragile and can be vulnerable to the various economic headwinds, continued improvement in employment, rising consumer confidence, and stronger real estate markets are all contributing to an improved global economy.

The Fed will be watching the housing market this summer as it considers the timing of inevitable future interest rate increases. Also, the second week of July marks the unofficial start of the Q2 corporate earnings season.

After the dismal Q1 GDP final reading, corporate earnings reports may take on even greater significance than usual as analysts try to estimate economic growth.

Strong market returns like those we’ve seen over the last 18 months can produce “exuberance” or worry—a concern that markets may be poised for a fall. While we all know that markets both rise and fall, there has never been a better time to remind you to stay disciplined and remain focused on your long-term investment and financial goals.

We cut loose under-performers and picked up J.M. Smucker and Financial Engines.

Historically, most pandemics have had little negative market impact.

The South America model at Covestor returned positive results in August even though the S&P 500 finished in the red, as well as Latin America as indicated by the iShares Latin America 40 Index ETF (ILF). It was a mediocre month for Brazilian stocks – the largest Brazilian fund, iShares MSCI Brazil Index (EWZ), fell from $ 70.38 on July 30 to $67.75 on August 31 – but the Chilean and Peruvian equity in my portfolio performed well.

The company has continued to beat Wall Street’s estimates in each of the past five quarters.