The Bank of Internet Holdings (BOFI) has been a company on my watch list for the last several months and now is one of the biggest holdings in the Leveraged Value portfolio. Shares have traded as high as $106 in March and recent declines have offered a possible entry point in the low $70 range in my opinion. On July 24, the stock closed at $72.57 per share.

Bank of Internet Holdings was started in 1999 and is based in San Diego, California. The company has more than $2.8 billion in deposits and offers the deposit and loan products of your typical bank. The difference being that Bank of Internet is an online only bank with no branch network.

My first real job happened to be as a teller for a mid-sized regional bank. More specifically my teller job was a “floating” position, so I worked at 20 different branches, wherever help was needed.

This entry level position doesn’t make me an expert on banks, but the travel did give me a more broad perspective of banking. Here are my 3 key takeaways from this experience and why I believe online banking is the way of the future.

Nearly every day, at every branch, there were unhappy customers due to fees. Overdraft fees are one thing, but the minimum balance and minimum transaction fees lead to irate customers. How long will customers continue to let banks profit off their deposits, only to have the bank turn around and charge them fees?

Customers will demand more when they find a superior alternative. In the Consumerist’s 2014 tournament of worst companies, the banking sector “led the way” with 4 of the 64 worst and 2 of the final 16. Online banks have much lower operating costs and thus are able to charge little to no fees.

I worked at a few banks in some very rough areas. They had metal detectors at the entrance or the bank hired security officers. The banks had prior histories of robberies which led to this increased security. The average customer there had a very low average balance but yet came into the branch much more frequently than at a typical branch.

That means lower revenues, and much higher expenses. From a pure profit motive standpoint it was clear that nobody in their right mind would choose to open a branch there.

It was then explained to me that these branches existed to comply with The Community Reinvestment Act. Although this is a relatively minor aspect of the overall branch network, it is just one more competitive advantage online banks have on brick and mortar banks.

They are a game changer in my opinion. I used to choose banks based on their available branches in my area so that I could deposit and withdrawal conveniently. I rarely use cash in lieu of credit or debit cards, but when I need cash I can always get cash back at a grocery store or use a network of stand-alone ATMs.

Now that mobile deposit is available, I deposit from the comfort of my couch. I can’t remember the last time I actually went inside a bank. I receive similar feedback from others in Generation Y. I believe a day will come when branches are more of a liability than an asset.

Now that I’ve given a qualitative review, let’s see what kind of story the financial statements are telling.

Below is a comparison of Wells Fargo (WFC) versus Bank of Internet (BOFI). The data are based on the last 12 months of financials as of 7/22/14. To simplify, I’ll be highlighting a few key areas and I’ve listed numbers as a % of revenue to put the two companies on an equivalent scale. 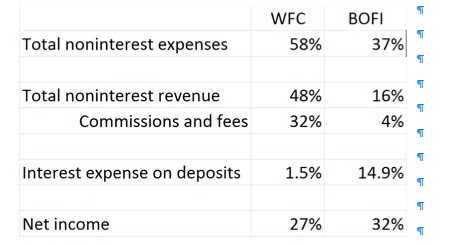 I’ve listed non-interest expenses (administrative expenses) first because it is the key to BOFI’s competitive advantage. BOFI’s customers’ utilize technology to lessen the administrative cost to the company.

Wells Fargo then tries to catch up by generating 48% of its revenue from non-interest revenue, the majority of this being commissions and fees. BOFI then rewards its customers by offering much higher rates on deposits (1.25% with conditions as of 7/22/14). And yet, BOFI still rewards its’ shareholders with a higher profit margin of 32%. 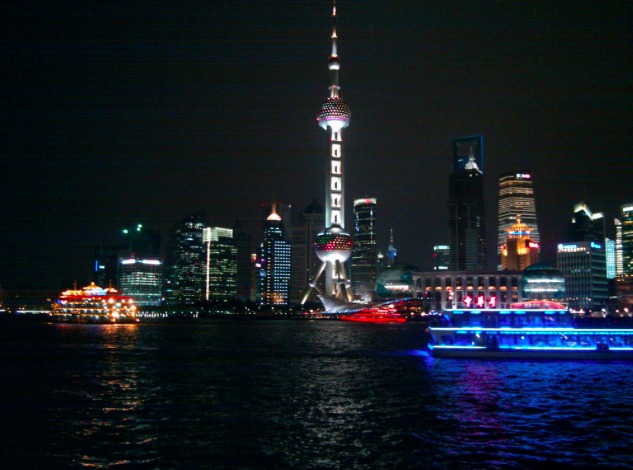 Covestor manager Jesse Barkasy has traded his own accounts for 24 years and has worked as a professional trader for 13 years. He […]