Here are three reasons to think we are not in the beginnings of a major stock correction:

1) Financial stress is up, but not much

Yes, financial stress has risen in recent days, amid new worries about Greece. But let’s put that in perspective: 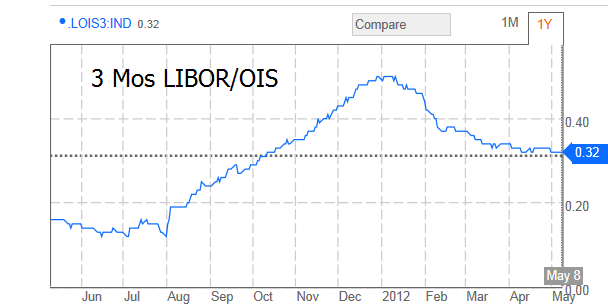 The chart you see above is Libor-OIS spread chart, one of the key measures of banks’ unwillingness to lend to each other. The very latest suggests it is at 0.35 in the forward market, up from 0.32 previously. That is barely out of its long sideways range since the middle of March. It’s not “off the charts”. It’s not even close to the year high set in January, of 0.51. And for perspective, it was 10 times its current figure at the height of the financial crisis in October 2008.

This is a certainly a metric to watch going forward. But for now, it suggests that money markets remain liquid, even with the threat of Greece leaving the Euro, the possibility of Greek debt defaults, and what that could mean for Europe’s economy. All in all, systemic risk is not the worry.

One of the prerequisites of a major decline is sentiment extremes. And we never really got to a bullish extreme in 2012. 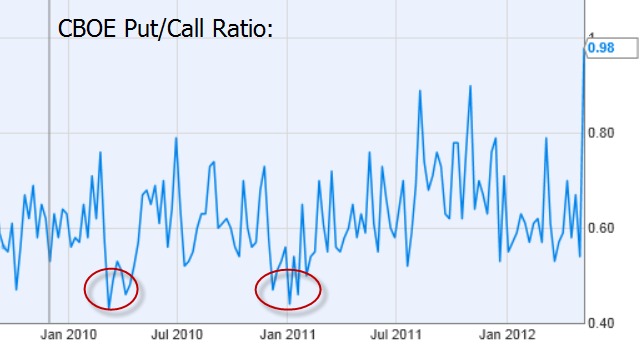 The chart above is the CBOE Put/Call Ratio. It measures the ratio of bearishness in the equity options markets. This is not an immediately predictive measure; you don’t sell off markets the moment you see bearishness at an extreme low. But it provides an early warning of a potential price trend reversal.

What this chart shows is that the markets never got all that complacent this year. To the contrary, the spike in bearishness in recent days is more interesting. That is suggesting that equity markets may soon be oversold.

Mark Hulbert at MarketWatch tracks sentiment in a different way — the bullish and bearishness of newsletter writers. His latest makes a very similar conclusion: Bullish sentiment is not at an extreme right now, and remains far below where it was prior to the last two market declines. For that reason alone, he is of the mind that we are in a minor correction, not a major one.

Here you see the stock market’s earnings yield and the yield on government bonds. It’s an easy and effective way to track the value of the asset classes relative to each other.

What this shows is that stocks yields are historically cheap relative to bonds, with a very large 5-point yield gap. That was not the case at all in the declines in 2008. There were pretty big gaps in stock and bond values ahead of declines in 2010 and 2011, but not to this extreme.

That should help to temper a big decline for stocks; they might only fall so far before market participants see them as a far better deal than bonds. 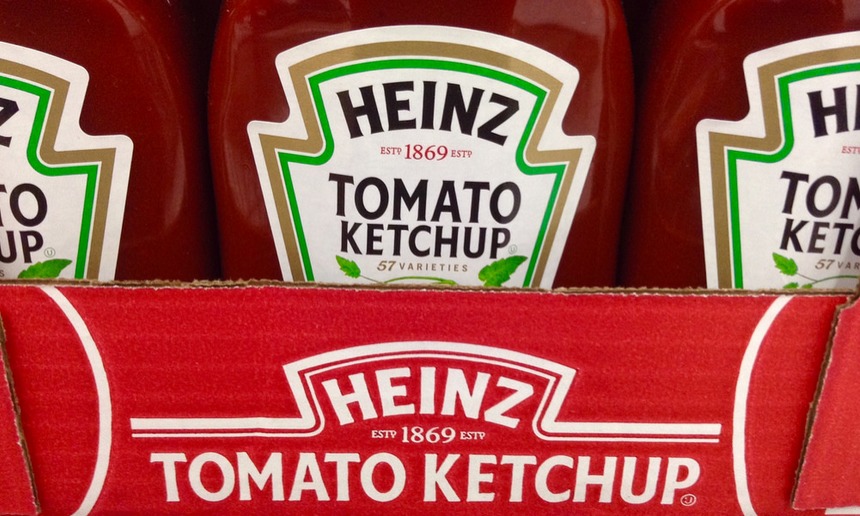 M&A deals are expanding worldwide. Here’s how to play it. 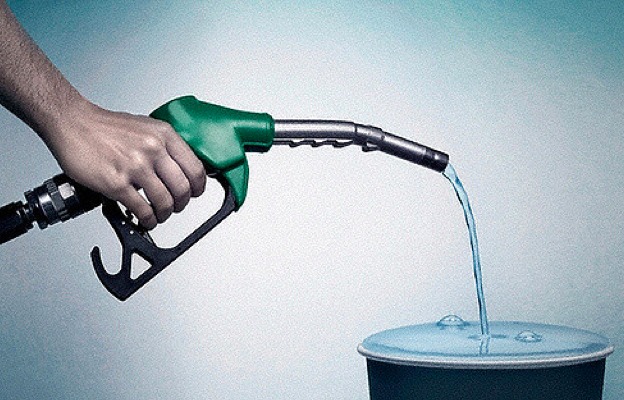 Oil inventories are 53% above their historical average

Lee Eisenberg, former editor-in-chief of Esquire, wrote a book on Americans and shopping. As part of his research, Eisenberg investigated the conventional […]